It's easter, so a hen in Croatia is laying green eggs!!! 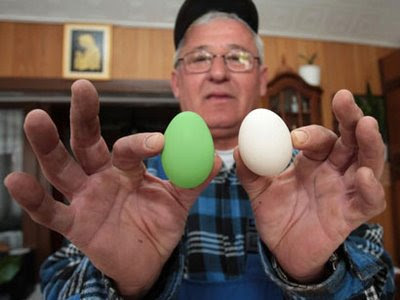 Stipa Gregacevic was astonished when his prize hen Fata began laying coloured eggs at the family farm in Forkusevci.

"I can't really explain why it happens," said Stipa. "Some say it might be because we put red pepper in the hen food."

And Stipa says customers are happy to shell out twice the going rate for normal eggs to buy a carton of his coloured specials.

"We're an organic farm and we're always being told to be more Green but I don't think this is what the scientists have in mind," he added.