Swaziland, where the poor starve and the king is, well, king... 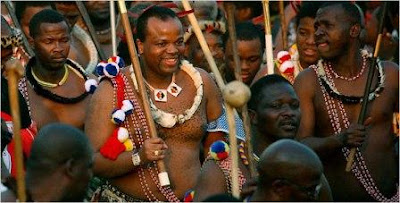 Once upon a time, a young and handsome king ruled over a land of mountainous splendor near the southern tip of Africa. He liked to marry, and as the years passed he took 13 wives, each of them a great beauty.

His countrymen wanted His Majesty to be happy, but some also thought so many spouses were an extravagance for a poor, tiny nation. After all, the king, Mswati III, often provided these wives a retinue, a palace and a new BMW.

A great event was soon forthcoming — on Saturday, in fact. To prepare for the day — the 40-40 Celebration, so-named to honor the king’s 40th birthday and the nation’s 40th year of independence — a 15,000-seat stadium was built and a fleet of top-of-the-line BMW sedans was ordered for the comfort of visiting dignitaries.

Once again, some people wondered how the kingdom, Swaziland, could afford the expense. Some 1,500 of them grumpily marched in protest through the capital after news reports said that several of the queens and their entourages had gone on an overseas shopping trip aboard a chartered plane. More...