Why are the people of China doing push-ups? An interesting look at China's netizens... 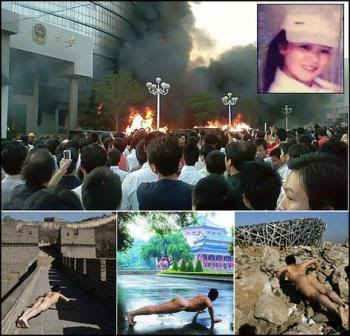 The current fad in China for push-ups is not inspired by the approach of the Olympic Games; nor is it part of a campaign to improve physical fitness.

In a country that employs a vast bureaucracy to monitor all types of internet activity and where posting a comment critical of the authorities can land you in re-education camp, people have to choose their words very carefully.

So they resort to euphemisms to evade the cyber spies and skirt the automated keyword blocking tools which the Chinese authorities use to keep tabs on the online world.

When a Chinese blogger says "I'm just doing push-ups", it's actually a roundabout about way of attacking the regime without risking retribution.

The phrase came into use last month after a mob of 30,000 ransacked government offices in the town of Weng'an in far-off Guizhou province.

The people were venting their anger over the death of 15-year-old schoolgirl Li Shufe who was suspected of having been raped and then thrown into a river by her attackers and left to drown.

The accused, who were released after being questioned, were suspected of being related to a senior Communist Party officials.  More...

And this: China: angry air travellers smash up airport!!

And this: Arrest of Chinese internet dissident Huang Qi...

And this: Golden Shield, China's all-seeing eye. ( Must read)