Tonga: US$2.5m for the coronation of King George... 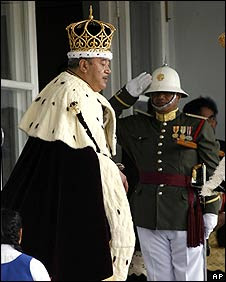 Officials say some 5.7m Tongan dollars (US$2.5m) are being spent, in a country where poverty is widespread.

Hundreds of dignitaries are arriving to see King George Tupou V enthroned in a Christian ceremony on Friday.

The king, 60, was given roasted pig and kava, a mild narcotic drink, to mark his coronation in a traditional ceremony on Wednesday.

On Tonga's main island, Tongatapu, buildings and fences are decorated in bunting in the national colours, red and white. Hundreds of banners congratulating the king have been hung across roads.  More...

See also: King of Nepal leaves royal palace, but what to do with royal cows?

And this: Nepal no longer a monarchy...