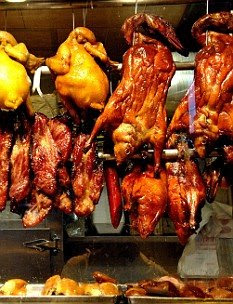 Britain's favourite Chinese dish is back on the menu after a U-turn by council health-and-safety inspectors.

Ten restaurants in London’s Chinatown were affected and there were fears that hundreds of businesses across the country would be forced to close down their large Chinese-made roasting ovens, which are also used to cook Cantonese Duck and suckling pig.

The inspectors sealed up ovens not branded with a CE (Conformité Européenne) mark because they did not conform to Brussels safety standards on carbon-monoxide emissions.

Last month The Mail on Sunday revealed the clampdown, which came despite an admission by council officials that there had been no reported health problems linked to the ovens.

And this: Man defies the State by selling raw milk and cheese without a permit: the State is not amused...