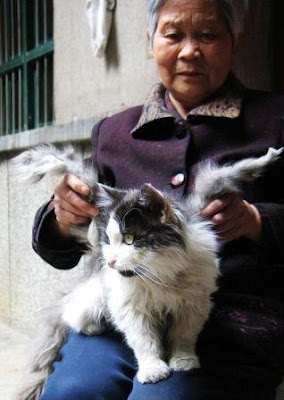 One animal started to develop the "wings" during a period of hot weather in Sichuan, a large province in southern China where a devastating earthquake struck this spring.

Although the growths appear fluffy, they contain bone. But veterinary experts say that despite the hard inner core, the flaps do not harm the cat's quality of life or safety.

Several animals were photographed with the furry protuberances by a local newspaper photographer.

"At first they were just two bumps, but they started to grow quickly, and after a month there were two wings," said one cat's owner, who was only identified as Feng.

"Many female cats in heat came to harass him, and then the wings started to grow," she told the local Huashang News.

Although Feng attributed her pet's condition to the stress of a feline love life and the hot Sichuan summer. However, scientists said the wings had a less romantic explanation.

In fact, the hairy growths probably developed because of unusual grooming habits, a genetic defect or a hereditary skin condition.