Indonesian woman has metal wires growing out of her body... 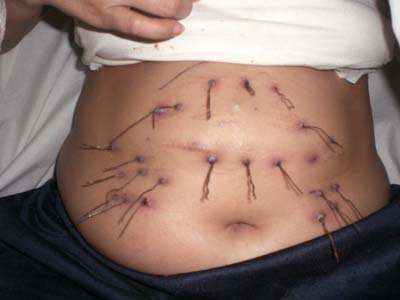 It's currently big news in Indonesia. Metal wires about 10-20 cm long grow from a woman's body! Skeptics initially thought that is must be "self-inflicted". Doctors however, have other theories but have given up on providing any scientific or medical explanations.

The woman had this problem for 17 years and currently being investigated by the Ministry of Health. Initial consultation with doctors and specialists found that the wires are also inside her body. At this stage, there were no current medical explanations or any case ever exist. Hence, there is but only one other possible consideration… Occult magic.

Her name is NOORSYAIDAH. A 40 years old kindergarten teacher from Sangatta, East Kutai. Her first symptoms started manifestating in 1991. The metal wires grew out of her chest and her belly. There was no explanation then (or even now). During the first week wires kept falling off from her body and were gone. A month later, the wires grew back again and from that time onward the wires did not fall. They kept growing!

One of her sisters said that she tried to help by trimming the wires. Alas, whenever she trimmed the wires, the wire retreated as if it were hiding and then popped up in another part of Noorsyaidah’s body.

There have been 4 Medical Specialists taking this matter seriously and have treated her in several ways. And as the result, doctors can’t figure out what exactly is happening to her. The doctors have taken an X-Ray image from her stomach and found that there are more than 40 metal wires inside her and some of them are bursting out of her skin. They looks like a living phenomenon. The wires are able mobile and therefore can change location at will, Thus the doctors are forced to use a magnet to scan the exact position of the wires. The wires bursted out without any symptoms of Tetanus, but she said that they’re hurting her like when needles sting.