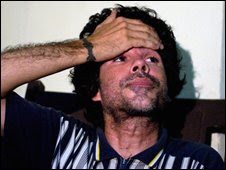 A court in Havana, Cuba, has ordered a punk rock musician to pay a fine of $30 (£15) for public disorder for playing his band's music too loud.

However, Gorki Aguila was cleared of a more serious charge that could have led to a jail sentence.

He had faced a possible four year term in prison for the crime known in Cuba as social dangerousness.

The controversial law allows the jailing of people who the authorities believe have been displaying behaviour that would indicate they could be on the verge of committing a crime.

But, prior to the trial, prosecutors decided to drop the charge. Instead Mr Aguila was found guilty of public disorder for playing his group's music too loud while they were recording their new album.

He was then ordered to pay a $30 fine and released.

Minutes later, the outspoken bushy-haired singer told reporters gathered outside his house that it was clear the international interest in his case had played a key role in the last-minute decision by prosecutors to drop the more serious charge he was facing.

He also vowed to continue criticising the Cuban government and its emblematic communist leaders like Fidel Castro and the current president, Raul Castro.

Nothing, he said, could ever be gained by remaining silent.

There has been no comment regarding the case from the Cuban authorities.