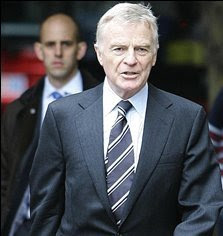 The High Court ruled the News of the World did breach Mr Mosley's privacy, awarding him £60,000 in damages.

The 68-year-old admitted a consensual sadomasochistic sex session with five prostitutes at a London flat in March, but denied that it had a Nazi theme.

The paper's story was based on a secret video from one of the women.

At the High Court, Mr Justice Eady did not make the unprecedented award of punitive - rather than compensatory - damages that had been sought by Mr Mosley.

He says his life has been devastated by the News of the World story and the posting of secretly-filmed footage of the sex session on its website.

He told the court that the publicity had been "totally devastating" for his wife of 48 years, and he could think of "nothing more undignified or humiliating" for his two sons to experience.

The paper's editor, Colin Myler, had told the court that he believed the story was one of "legitimate public interest and one that I believe was legitimately published".

He also said: "We felt that what we saw, what we witnessed, was on balance a fair and reasonable interpretation of Nazi-style role-play."

Mr Mosley is president of the International Automobile Federation (FIA), the governing body for sports such as Formula 1.

His father was the 1930s Fascist leader Sir Oswald Mosley.

And this: Max Mosley sex video will remain on the Web...