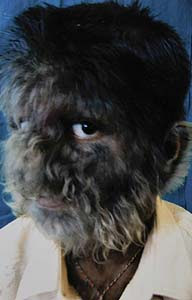 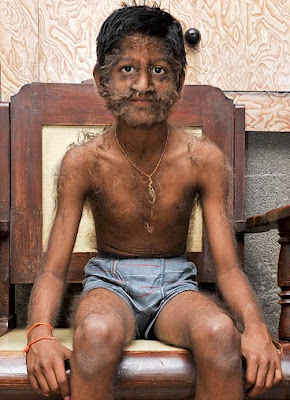 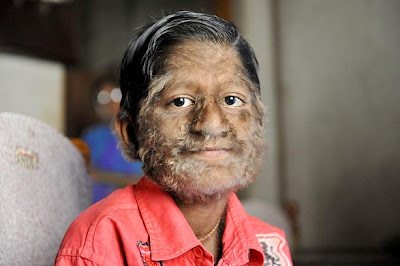 Hypertrichosis, also known as Werewolf Syndrome, is a rare genetic condition that has been plaguing Pruthviraj Patil since birth. Believed to be one of a mere 50 people in the world with the condition, Pruthviraj and his family have tried numerous treatments, but have had little luck. From homeopathy, to traditional Indian Ayurvedic remedies and even laser surgery, the Patil family has tried a lot, but the hair just keeps coming back. They are desperate to find a cure.

Pruthviraj says, “I would like to get the hair removed but even after laser treatment it grows back. The doctors don’t have any answers.” The hair is thick, matted and covers the boy’s face resulting in a lifetime of being stared at, bullied and harassed. “It is difficult when I venture outside of my hometown or where people don’t know me,” says the boy.
“Why did God do this to us?” asks his mother. “He looks so odd and wherever we go people throng to see him.” When he was born some villagers regarded him as a God, while other saw him as a supernatural creature or a bad omen.

Despite his appearance, Pruthviraj is a popular student at his school. “When I first went to school I used to get bullied and other children would laugh at me,” he says, “but now they treat me like normal. We all play cricket together and the hair doesn’t stop me running or catching the ball, so it is not a big problem.”

Vinay Saoji, a plastic surgeon, says the boy suffers from one of the rarest genetic conditions. “Hair nevus, where a person has patches of excess hair growth or hirsutism, is not uncommon. But hair persisting all over the body is very rare,” he explains. “Though I have seen such cases documented I have never come across anyone suffering from the condition until now.”