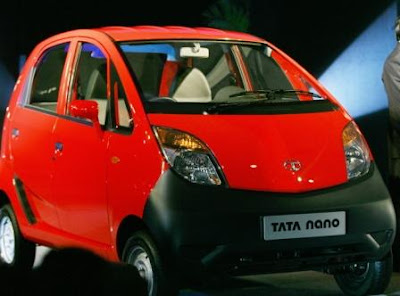 Work at the Indian factory where the Nano, billed as the world's cheapest car, is to be made has been suspended indefinitely amid local opposition.

Tata Motors has decided to look for alternative manufacturing sites after violent protests by farmers in West Bengal where the plant is located.

Farmers want the return of 400 acres of land and their protests have prevented any work at the plant since Friday.

Tata said the situation at the plant was "hostile and intimidating".

Farmers' groups said they were not seeking Tata's withdrawal from the area, some 50 kilometres north of Calcutta.

But they said the land on which the plant in Singur is being built had been forcibly acquired from "unwilling" farmers.

"There is no way this plant could operate efficiently unless the environment became congenial and supportive of the project," a company spokesman said.

The BBC's Subir Bhaumik in Calcutta said other Indian states such as Maharashtra were keen to lure Tata to build the car there.

The Nano project was a major boost for the West Bengalese economy, with local authorities hoping to develop the area into a regional hub for low-cost car production.

The Communist-led coalition in the state described Tata's decision as a "major loss" and described the current protests as "irresponsible".

One of the leaders of the protest movement said farmers' rights to their land had to be respected.

"It is Tata's decision, not ours. We never asked them to leave."