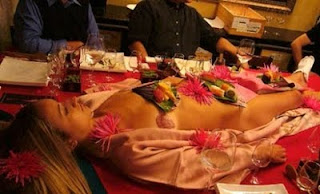 Boring is certainly not a word that can be used to describe a dinner hosted by the Secret Cooks Club.

Since its inception in February, it has organised suppers that required every dinner guest to send in saliva samples, with meals subsequently created based on their DNA.

Last month, it served a dinner for six inspired by the Japanese practice of nyotaimori - serving sushi on a naked woman's body.

This food club's novel nosh has also been featured in British newspaper The Guardian recently, with the paper describing its efforts as a 'culinary renaissance'.

Founded by expatriates Florian Cornu, 26, and Denisa Kera, 36, the group, which has attracted more than 200 members, bases its dinners on novel technology, philosophy and food science concepts. More...