She was once the Iron Lady... 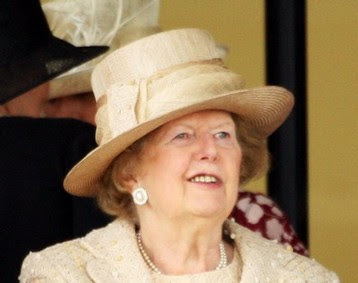 Lady Thatcher has had dementia for as long as eight years, a condition that meant that she needed to be reminded that her husband had died, according to the memoirs written by her daughter, Carol.

In her book, A Swim-On Part in the Goldfish Bowl: A Memoir, Carol Thatcher describes her mother's memory as having been at one time like a "website", but said that in 2000 she noticed it starting to fail when the former prime minister confused Bosnia and the Falklands in a conversation about the war in former Yugoslavia.

Thatcher's premiership was revived in 1982 by the Falklands war, while the Bosnian war came on John Major's watch, more than a year after she had been forced from office.

Carol Thatcher said of the slip-up: "I almost fell off my chair. Watching her struggle with her words and her memory, I couldn't believe it."

In an extract serialised in a Sunday newspaper, she describes having to break the news of Denis Thatcher's death to her mother more than once. He died in 2003 of pancreatic cancer. "Dementia meant she kept forgetting he was dead. I had to keep giving her the sad news over and over again. Every time it finally sank in that she had lost her husband of more than 50 years, she'd look at me sadly and say, 'Oh', as I struggled to compose myself. 'Were we all there?' she'd ask softly." More...