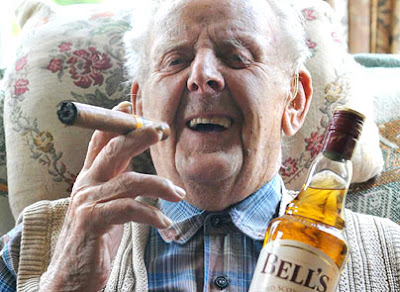 Jack Priestly claims he has suffered no serious health problems related to his tobacco and alcohol habit.

Mr Priestly, a widower and former baker, began smoking cigarettes when he was nine and claims to have smoked every day since.

He changed to cigars in 1966 after he said he was told they were "healthier" and celebrated his century last Saturday.

The grandfather from Pinchbeck, Lincolnshire, who also has six great-grandchildren, said: "I've been operated on from toe to head but I've still got a good set of lungs. There's nothing wrong with them.

"I love my cigars. I wouldn't be without them. I don't care about the brand - a cigar is a cigar. But I'm not a fan of the small ones. The bigger, the better.

"My doctor wasn't a fan of pipes. He advised me to smoke cigars instead. And who am I to ignore doctor's orders?"

Since his first puff in 1917 he has smoked 153,000 cigars and 715,400 cigarettes and drunk a shot of whisky in his morning cup of tea every day since the age of 24. He has not suffered any serious health problems related to smoking or drinking.

His mother-in-law got him hooked on whisky, which he drinks without fail as soon as he gets up, before he has even had breakfast.

"She said the best thing for a woman is for her to drink whisky before she does anything, every day," he said. "I don't feel my age. I've still the mind of a young man. But if I had the company of a good woman, I'm sure I'd feel 40 years younger in a flash."