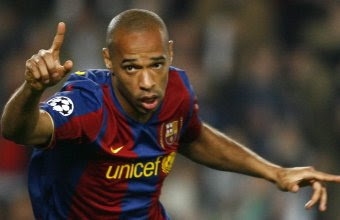 The Manchester United boss has been forced to look at other strikers after being blocked so far in his attempts to sign Dimitar Berbatov.

And ex-Arsenal star Henry is one of those near the top of his list. Ferguson believes the Barcelona forward could do a similar job to Berbatov, leading the line at Old Trafford in a role which would release Wayne Rooney from his shackles.

But it is the emergence of Henry as one player in the frame that will come as a huge shock to Premier League supporters – particularly Gunners fans.

The thought of seeing their hero line up in a United shirt will fill Arsenal followers with dread – but such a prospect is not out of the question.

Ferguson is desperate to bring in another forward, but with Spurs playing hardball and seeking to find other buyers for £30m Berbatov, the Scot has been forced to cast his net further afield.

There are few players in Europe with the pedigree to fulfil the role, which has led Ferguson to check out Henry’s situation at the Nou Camp.

Though new boss Pep Guardiola has indicated he wants Henry, 30, to stay, the fact Samuel Eto’o is still at the club means the Frenchman could be available.

The United boss has a history of making surprise signings – the likes of Eric Cantona and Henrik Larsson all came out of left-field.

And he has no qualms going in for a player with such a big Arsenal history as he proved two years ago by trying to tempt Patrick Vieira to Old Trafford.

Much depends on whether Ferguson wants a player to make an immediate impact, or a signing to build for the future.

Dutch striker Huntelaar represents a long-term plan but in Henry, Ferguson knows he would be getting a player already adept at the demands of Premier League and Champions League football.

See also: Nigerians look to England for their soccer thrills...

And this: Manchester United to woo fans in India...