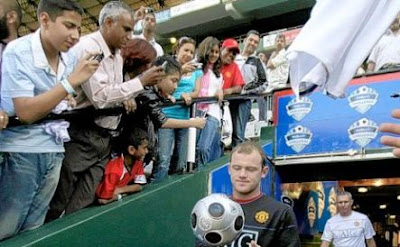 Football has opened its eyes wide to the benefits of world travel since a member of Ron Atkinson's West Bromwich squad stood with his team-mates at the Great Wall of China in the 1970s and said dismissively: 'Once you've seen one wall, you've seen them all.'

Manchester United, however, have long since been prepared to break fresh ground and push the boundaries that bit further.

A recap of United's recent summer tour destinations reads like a travel log that Alan Whicker may have put together.

Australia, America, China, Korea, Thailand, Malaysia, South Africa and, by Sunday, Nigeria will all have been ticked off the travel itinerary in the last 10 years. And United are now preparing to add one of the few untapped territories to their roster - India.

'We've been approached to go there and we are looking at some soccer school opportunities. We would not rule out going. It's a very wealthy country and is definitely worth looking at.' More...

See also: Manchester City turn to "feng shui" to boost up their results!!!

And this: Man.Utd: Kings of England, Kings of Europe!!!