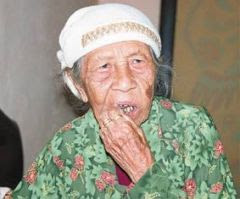 Mak Erot -- who reports aged anywhere from 101 to over 130 -- prompted legions of imitations of her famous clinics, many using her famously craggy and birthmarked face to lure in anxious men.

While her legacy has been closely guarded by male descendents intent on maintaining the purity of the treatment, Mak Erot has become a pop-culture icon in everything from advertisements to teenage romantic comedy films.

Reports of he death prompted a flurry of bemused online comments from Internet users in the world's largest Muslim-majority country.

User "Jengkol" wrote on news website Detikcom: "Oh no, I didn't have the chance to go to Mak Erot and now she's dead. I'll just have to buy a vacuum. Maybe that could be the solution to my problem."

And this: Baby born with penis on his back!!!

And this: Iceland's penis museum!!