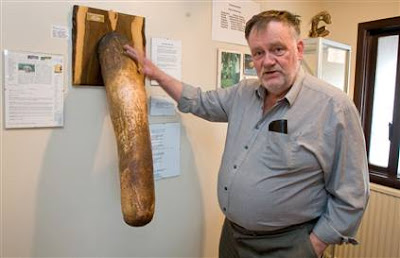 Sigurdur Hjartarson is missing a human penis. But he's not worried: four men have promised to donate theirs to him when they die.

Hjartarson is founder and owner of the Icelandic Phallological Museum, which offers visitors from around the world a close-up look at the long and the short of the male reproductive organ.

His collection, which began in 1974 with a single bull's penis that looked something like a riding crop, now boasts 261 preserved members from 90 species.

One species conspicuous by its absence is homo sapiens, but that may soon be rectified since a German, an American, an Icelander and a Briton have promised to donate their organs after death, according to certificates on display.

The American, 52-year-old Stan Underwood, supplied a written description of his penis — which he purportedly nick-named "Elmo" — for display alongside a life-size plastic mould of the member as well as his pledge to donate it. More...

See also: Has someone stolen your penis? Oh boy! Oh boy!
And this:Unfaithful husband? No problems, just cut off his dick!!
Posted by Unknown at 9:46 PM