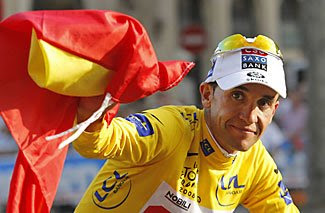 A cheer rose from Madrid's Plaza de San Andrés on Sunday as cycling fans, gathered around televisions, watched native son Carlos Sastre coast around Paris's Arc de Triomphe to win the Tour de France. But the ovation was polite compared to the roar that greeted Rafael Nadal's Wimbledon victory two weeks earlier or the raucous all-night party ignited by Spain's soccer team when it claimed the European Cup on June 29. Spain, it seems, is getting accustomed to winning.

With this impressive string of victories, Spain has emerged as an international sports powerhouse. Indeed, in 2007, Spanish athletes competing in Olympic Federation sports won 66 medals in international competitions and 114 in European ones, up from 21 and 22, respectively, in 2003. Spain is now readying for unprecedented performances at the Olympics.

"In June and July we have had two months without comparison in our history," Jaime Lissavetzky, secretary of state for sports, said at a press conference Sunday. "It proves that there are many high-level athletes in this country, and it could be a good omen for the Olympics."  More...