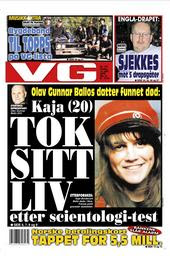 A little over two weeks ago Kaja Bordevich Ballo (20) committed suicide - a few hours after she'd recieved a devastating result on a personality test administrated by the Church of Scientology.
The police in the southern French town of Nice - where Kaja studied at the university of Nice Sophia Antipolis - are investigating the controversial church's connection to the event.
Kajas father is the noted politician Olav Gunnar Ballo (SV), a member of parliament for years, vice president of Odelstinget and fearless healthcare spokesperson for his party. Maried to Ballo and mother of Kaja is Heidi Sørensen (SV). Sørensen has previously been the leader of Naturvernforbundet and a member of parliament, she is now a undersecretary of state at Miljøverndepartementet.
The news VG publishes today, are printed after agreement with Ballo himself, and the rest of Kaja's family.
- The information about the Scientology test has been made public through the priest's speech at the memorial service. I can confirm that. Due to the recency of her death, I don't wish to elaborate on or comment on other matters now, Olav Gunnar Ballo told VG.
Kaja died on March 28, and was buried at Grefsen church last friday. A large group of friends followed her to the grave. Many were also in support during a memorial held in the Stortinget the same afternoon.
Personality test
According to information VG has received, the connection to the Scientologists was made after the family found a completed personality test and the Church of Scientology's analysis of what they contend is her personality, in Kaja's 17 sqm student room after her death.
The test had been timestamped and dated: It had been taken the same day as her death. The Church of Scientology have their premises only a few meters from the student home where Kaja lived.
Henrik Møinichen (19), a fellow student of Kaja, tells VG that he walked with Kaja to the university and class at nine o'clock on friday the 28 of March.
- In my opinion she was as usual. She participated in class as usual, talked and was happy, Møinichen told VG.
After the class in French for foreigners was over at 11 o'clock, Henrik left for the Nice airport to meet his father. Henrik lives in the neigboring room to Kaja. The last he heard of her, was that she was walking around her room at three-four o'clock in the afternoon. He was out of his room the rest of the day with his father.
As far as VG has been able to discern no friends or acquaintances had been in contact with the 20-year-old between the timestamp of the test, and the time at which she was found dead.
Vulnerable spot
- The test was found at her place by the family. After she was finished at school I've heard she went to buy clothes for someone. This is how she supposedly came in contact with the Church of Scientology, Møinichen says.
From what VG has been told Kaja received an extremely bad result on the test.
- I have a feeling that something must have happened suddenly, that they hit a vulnerable spot. Personally I believe that Kaja had been alive today if she hadn't been in contact with the scientologists. I had the impression that she enjoyed Nice. She often spoke of the the future and her plans at the university, said Møinichen.

See also: Jason Beghe: Scientology is a rip-off...
Posted by Unknown at 7:36 PM