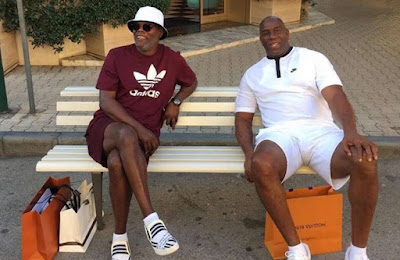 Samuel L Jackson and Magic Johnson might be most people’s idea of household names but the two high-profile individuals have been mistaken for immigrants on holiday in Tuscany.

The acclaimed Hollywood actor and retired basketball player were pictured sitting on a bench surrounded by luxury shopping bags, including Louis Vuitton and Prada, in Forte dei Marmi.

Johnson shared a photo of himself and Jackson in the popular tourist seaside town on Twitter, saying: “Sam and I chilling out on a bench yesterday in Forte dei Marmi, Italy. The fans started lining up to take pictures with us.”

The image was then widely shared on social media, with Italians assuming the pair were “migrants” and becoming outraged they had chosen to embark on an extravagant shopping spree with money from the state. Full story...