The physicist, Denise Milani and the suitcase of cocaine.... 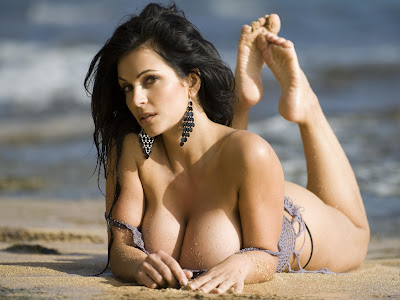 In November 2011, Paul Frampton, a theoretical particle physicist, met Denise Milani, a Czech bikini model, on the online dating site mate1.com. She was gorgeous – dark-haired and dark-eyed, with a supposedly natural DDD breast size. In some photos, she looked tauntingly steamy; in others, she offered a warm smile.

Soon, they were chatting online nearly every day. He would return home from campus – he had been a professor in the physics and astronomy department at the University of North Carolina for 30 years – and his computer would buzz. "Are you there, honey?" They'd chat on Yahoo Messenger for a while, then he'd go to the other room to take care of something. A half-hour later, there was the familiar buzz. It was always Milani: "What are you doing now?"

Frampton had been lonely since his divorce three years earlier; now it seemed those days were over. Milani told him she was longing to change her life. She was tired of being a glamour model, of posing in her bikini on the beach while men ogled. She wanted to settle down, have children. But she worried what he thought of her: "Do you think you could ever be proud of someone like me?" Of course he could, he assured her.

Frampton tried to get her to talk on the phone, but she always demurred. When she finally agreed to meet him in person, she asked him to come to La Paz, Bolivia, where she was on a photoshoot. On 7 January 2012, he set out for Bolivia via Toronto and Santiago, Chile. At 68, he dreamed of finding a wife to bear him children – and what a wife. He pictured introducing Milani to colleagues. One thing worried him, though. Full story...