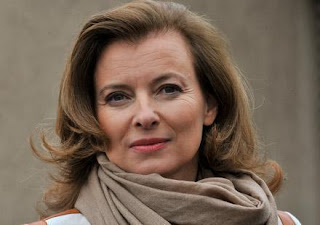 Valerie Trierweiler, the French first lady, has been accused of "embezzlement" because she is using taxpayers' money while not actually married to President Francois Hollande.

Xavier Kemlin, a multi-millionaire Frenchman, insists that the 48-year-old magazine journalist "should not take advantage" of public funds.

He has filed the complaint at a criminal court in Saint-Etienne, in the Loire department of eastern France.

It states that the presidential couple "are neither married, nor civil partners," and that "our taxes" should not have to "house, feed, pay the staff and travel" of a woman with whom taxpayers have "no link in law".

Despite being an avowed Socialist, Ms Trierweiler has become noted for her luxury lifestyle since moving into the Elysee Palace last year.

She not only has access to official homes, cars and planes, but also retains her own office and staff. Full story...