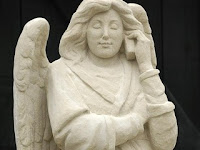 A statue of an angel holding a mobile phone is to be installed in The St. John's Cathedral in Den Bosch, Netherlands next month, to replace an older statue that had been badly eroded by weather and pollution.

The new 1.25 meters high statue is made of sandstone and will be placed about 15 metres above ground on the south-side of the Cathedral. The mobile phone of the angel has only one button though. That is, the artist said, "because the angel just have to communicate with God."

The statue was designed by sculptor Tony Mooy from Amersfoort and approved by an art committee of the church. Mooy wanted other angels with wings instead of jet engines, but that went too far the ecclesiastical art committee. Source...