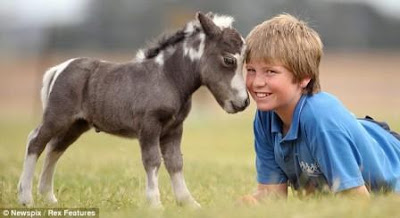 Toy horses are usually pink and plastic – and aimed at young girls.

But this little pony is 100 per cent natural – and ready to make friends with anyone her size.

Born ten days ago at a stud in the southern state of Victoria, Australia, the 15in miniature horse – which is yet to be named – has already formed a bond with Sam Leith, 12.

Silver dun tovero in colour, she was given a clean bill of health – and should reach 24in when grown.

The birth has generated such excitement in the community that local people are entering a competition to give the horse a name in time for Christmas. Story + more photos...