Christians not amused by Jesus statue with a hard-on... 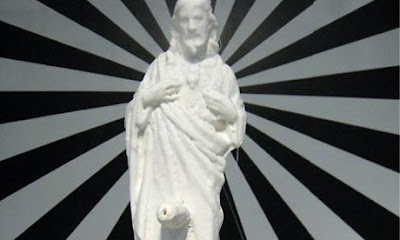 Representatives for a gallery in Gateshead appeared in court yesterday charged with outraging public decency, after featuring a statue of Jesus with an erection.

The artwork was part of the Baltic Centre for Contemporary Art's September 2007-January 2008 exhibition Gone, Yet Still, by the controversial Chinese artist Terence Koh, which featured dozens of plaster figures including Mickey Mouse and ET - all in some state of arousal.

Lawyers for Emily Mapfuwa, a 40-year-old Christian who was offended by the artwork, launched a private prosecution against the gallery for outraging public decency and causing harassment, alarm and distress to the public. Mapfuwa, of Brentwood, Essex, argues the Baltic would not have dared depict the prophet Muhammad in such a way.

She complained in writing to Northumbria police earlier this year, asking for an investigation, and was informed in May that there was no case to answer.

But the Christian Legal Centre - an organisation that aims to "promote and protect the biblical freedoms of Christian believers in the United Kingdom" - agreed to pay her legal costs. The CLC also funded the case brought by Stephen Green against the BBC over Jerry Springer - The Opera. A CLC spokesman said Mapfuwa believed in freedom of expression, but "this statue served no other purpose than to offend Christians and to denigrate Christ".

At Gateshead magistrates court yesterday, a solicitor for The Baltic Flour Mills Visual Arts Trust, the charitable body which runs the Baltic, indicated a plea of not guilty. The case was adjourned until September 23. Mapfuwa intends to cite a case from 1990 in which an artist and shop owner in London were convicted of outraging public decency over showing a sculpture made of foetuses.