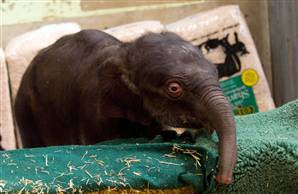 The mother of a newborn baby elephant is no longer tethered, and is now together with her baby, nursing it.

It's an exciting development for zoo handlers after the elephant mother Rose-Tu initially displayed aggression toward the newborn elephant.

Zoo staff have been busy since the baby elephant's birth, working to insure the baby's survival.

On Monday, Oregon Zoo Deputy Director described the scene to Portland news station KGW, which has been reporting the story from the beginning.

"Rose-Tu and her calf have been together since 5 p.m. last night," said Keele. "The staff has been working day and night to help ensure this critical reintroduction is successful."

The 286-pound calf approached Rose-Tu and nursed on both sides of her during the supervised reintroduction. Rose-Tu has been lifting her front leg forward and tucking the calf under her, almost like a hug, according to Keele. More...