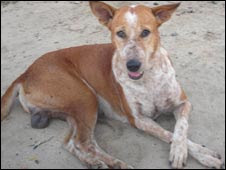 A dog has appeared in court in the eastern Indian state of Bihar accused of breaching the peace.

Police demanded severe action against the dog for biting people. Its owner says it has only attacked burglars.

The dog, named Chhotu, has been in trouble with the law before. In 2003, a magistrate sentenced Chhotu to death.

Neighbours complained he had gone mad and bitten several people. But animal rights activists managed to get the decision reversed.

Chhotu made his latest appearance in a crowded court on Thursday in the town of Purnea.

"The court was compelled to issue a summons to the dog since the police found that it was a threat to peace and feared that it might create a law and order problem," district official Rajiv Ranjan said.

In court Chhotu appeared to have been on best behaviour. More...

See also: Some jerk put a dog into a washing machine ... and turned it on...

And this: How to make a sculptured dog cake! Boy oh boy!!

And this: Heart-Kun - the Dog With a Heart-Shaped Mark