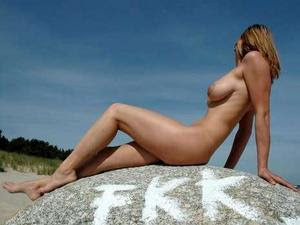 The Usedom beach on the German-Polish border has become the unlikely place for a fresh battle between the countries - a nudist war!

On the one side white bottoms burn in the sun. On the other side conservative swimming trunk-wearers turn up their noses at the naked beachgoers.

Now a heated argument has broken out between the exhibitionist Germans and the prudish Poles.

For the last fifty years sun-loving Germans have been preserving their naturist traditions from Ahlbeck (Mecklenburg-Vorpommern) to Swinemünde.

But following the Schengen agreement in December 2007 the fence separating the German and Polish parts of the beach was removed.

Now German nudists are battling the Poles for their freedom to prance around naked in the sun.

"It's ridiculous" said Swinemündes minister Edward Zajac. And Anja (28) from Poland, who clearly think the German nudists are real swines, said: "It's horrible. We would never bathe naked - we are Catholic."

But the happy-go-naked Germans are not amused. Elke Bernholz (44) said: "It's a nudist beach. It's terrible, that the Poles come over dressed and stare."

Ines Müller (46) is also shocked by the Polish behaviour: "You feel like an ape in a zoo. The Poles come with their binoculars, stare and swear."

The priest in Swinemünde, who called the nudists 'sinners', did however call for calm.

Kazimierz Sajadeusz (68) said: "From a Catholic point of view the nudists are sinners. But in Germany the people are brought up freer. I understand, that they go bathing naked. My fellow people are sometimes a little bit sensitive."

Authorities are hoping to stop the war by putting up signs in both languages to divide the beach into a nudist area and a clothed bathing area again.

See also: Italy: carry on sun-bathing, even with two corpses lying nearby?

And this: Nine British chicks arrested for taking part in oral sex competition in Zakynthos!!!