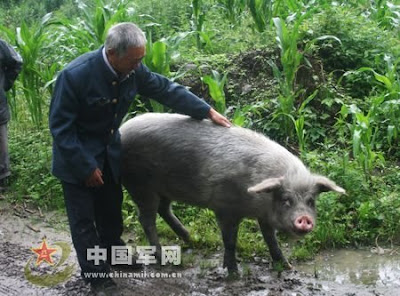 A pig that survived for 36 days buried beneath rubble in quake-hit southwest China on a diet of charcoal has been hailed by state press as a symbol of the will to stay alive.

The pig, who weighed nearly 330lbs at the time of the earthquake on May 12, had lost two-thirds of its weight when found last week, the Chongqing Evening Post said.

"It didn't look like a pig at all when it was saved. It was as thin as a goat!" a witness told Xinhua, the state news agency.

The one-year-old pig survived on water and a bag of charcoal that had been buried alongside it in the ruins of Pengzhou city, in Sichuan province.

Although charcoal has no nutritional value, it is not toxic either and it filled the pig up, the newspaper said.

The curator of the local Jianchuan Museum has already bought the pig for 3,008 yuan (£218). The price was originally 3,000 yuan, with an extra eight yuan added "for good luck".

The museum will keep it for the rest of its life "as a living symbol of the earthquake disaster" and has named the animal "Zhu Jianqiang," which means "Strong Pig".

Its original owner, Wan Xingming, had given up the beast for dead, but when he heard that soldiers were going to clean up the rubble around his house on June 17, he rushed back to warn them that the dead pig could be infectious.

That is when the skinny porker was pulled out of the rubble.

Nearly 88,000 people were left dead or missing following the quake, the biggest earthquake disaster to hit China in three decades.

And this: Looking for a new kind of pet? How about a mini pig?..