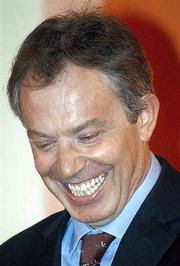 Former prime minister Tony Blair was left red-faced when he was caught travelling on a train without a ticket and said he had no cash to pay the fare, a report said on Wednesday.

Blair, who has earned around 500,000 pounds on the speaking circuit since leaving office in June, was confronted by a ticket inspector as he travelled to Heathrow airport to catch a flight to the United States on Monday, the Daily Mail newspaper reported.

He said he had no cash for the 24.50 pounds fare because money an aide had given him was no longer in his pocket.

The newspaper, quoting Blair's spokesman, said his bodyguard offered to pay the ticket, but the inspector said he could travel for free.

Blair, 54, has taken up a post as the Middle East envoy for the international Quartet -- the European Union, Russia, the United Nations and the United States.

He also has a lucrative part-time post as advisor to Wall Street bank JP Morgan and advises Swiss company Zurich Financial Services on a range of issues including climate change.

See also: All roads lead to ... Tony Blair?
And this: Isn't it wonderful being a former prime minister?
Posted by Unknown at 8:25 AM