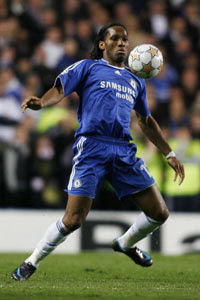 Powerful Chelsea striker was Premier League's top goal scorer in 2006-07 and Africa's Footballer of the Year in 2006. Rich vein of form has continued this season, and he remains the Blues' first choice striker ahead of some very expensive competing talent. Grew up in France from age 5, playing for Olympique de Marseille, where he won French Player of the Year, before moving to Chelsea as the club's then record signing for 23.8 million pounds. Full story...

See also: If only soccer were this sexy...
And this: Oliver Kapo's gift to his boot-boy: a Mercedes!! Wow!
And this: Real Madrid to offer record sum for Cristiano Ronaldo?
Posted by Unknown at 7:21 AM