A peek into North Korea via pictures... 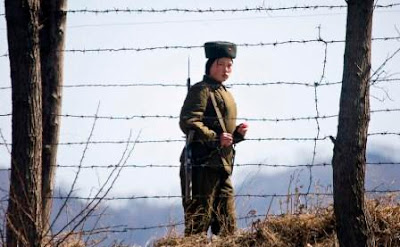 News stories about North Korea have been quite frequent recently, with their test launch of a rocket over Japan, withdrawal from nuclear disarmament talks coupled with a threat to restart their nuclear program, reports that their nuclear attack capabilities may be larger than previously thought - and their recent arrest and indictment of two U.S. reporters on its border with China. Even with all this attention, photographs from North Korea are still restricted and hard to come by. One way around that has been for photographers to peer inside from across the border, a pastime that has also spurred a level of curious tourism in both neighboring South Korea and China. Collected here are a some recent photographs, looking into reclusive North Korea from the outside - and some of the reactions these observations induce. (previously: Recent scenes from North Korea)    (37 photos total)