The 'lost' tribe that wasn't that lost... 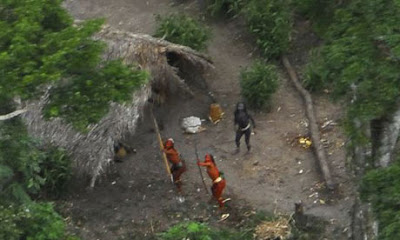 They are the amazing pictures that were beamed around the globe: a handful of warriors from an 'undiscovered tribe' in the rainforest on the Brazilian-Peruvian border brandishing bows and arrows at the aircraft that photographed them.

Or so the story was told and sold. But it has now emerged that, far from being unknown, the tribe's existence has been noted since 1910 and the mission to photograph them was undertaken in order to prove that 'uncontacted' tribes still existed in an area endangered by the menace of the logging industry.

The disclosures have been made by the man behind the pictures, José Carlos Meirelles, 61, one of the handful of sertanistas – experts on indigenous tribes – working for the Brazilian Indian Protection Agency, Funai, which is dedicated to searching out remote tribes and protecting them.

In his first interviews since the disclosure of the tribe's existence, Meirelles described how he found the group, detailed how they lived and how he planned the publicity to protect them and other tribes in similar danger of losing the habitat in which they have flourished for hundreds of years. More...

And this: Hakani: children buried alive in the Amazon. WTF!
Posted by Unknown at 7:30 PM