Iraqi woman and her son 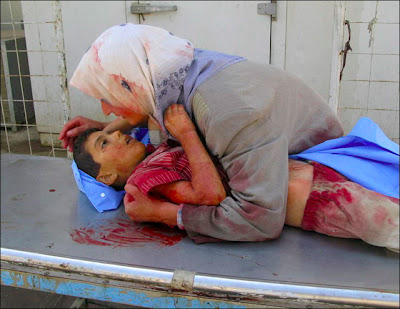 A woman takes her dead son into her arms, as she grieves for her six-year-old son, Dhiya Thamer, who was killed when their family car came under fire by unknown gunmen in Baqouba, capital of Iraq's Diyala province, 60 kilometers (35 miles) northeast of Baghdad, Iraq, on Sunday, Sept. 16, 2007. The boy's ten-year old brother, Qusay, was injured in the attack as the family returned from enrolling the children in school, where Dhiya was to begin his first year. (Adem Hadei, Associated Press.)
Posted by Unknown at 6:38 PM